Notes. Rivington Pike rising to the 1191ft contour, a satellite summit of somewhat higher Winter Hill, with it's array of radio masts. The Lever Estate including the pike was donated to the people of Bolton by William Hesketh Lever (Lord Leverhulme) founder of Lever Brothers empire on his death in 1925. The estate has been somewhat neglected but is now under restoration, with a myriad of paved paths, carriage drives, Japanese Gardens, ponds, bridges, caves and summer houses it's a big project, one day it will be finished and unfortunately the place will be more popular than it is today.

Popular it is, half the residents of Bolton and surrounding towns turn up on a sunday, now two residents of Oxenholme and one from Aspul (our grandson Jack) were joining them. After scratting around for a parking space we headed towards the Georgian facade of Rivington Hall, turning right before reaching the house, then left on a path we hoped would guide us to the Terraced Gardens, it did. Many paths ascend through the gardens we opted for one that crossed Royton Lane by way of Lever Bridge, a fine arched construction best viewed from the lane. We then turned left wandered passed a large pond then ascended a flight of steps (one flight of many today) passing the fine slender construction of Pigeon Tower to access Belmont Road, a stoney carriage drive.

Belmont Road then guided us to the path ascending Rivington Pike, apart from all the people the summit is marked by a squat tower, formally a hunting lodge. The views from this relatively low summit are quite staggering, described as the “most beloved high spot in Lancashire” the wind was bitter but the top was crowded. Enough of the stunning views, enough of the bitter cold we descended to the Belmont Road then continued descending through the Terraced Gardens making a point of walking under Lever Bridge, we spilled out of the gardens behind Rivington Hall Barn, a short distance from the parked car. 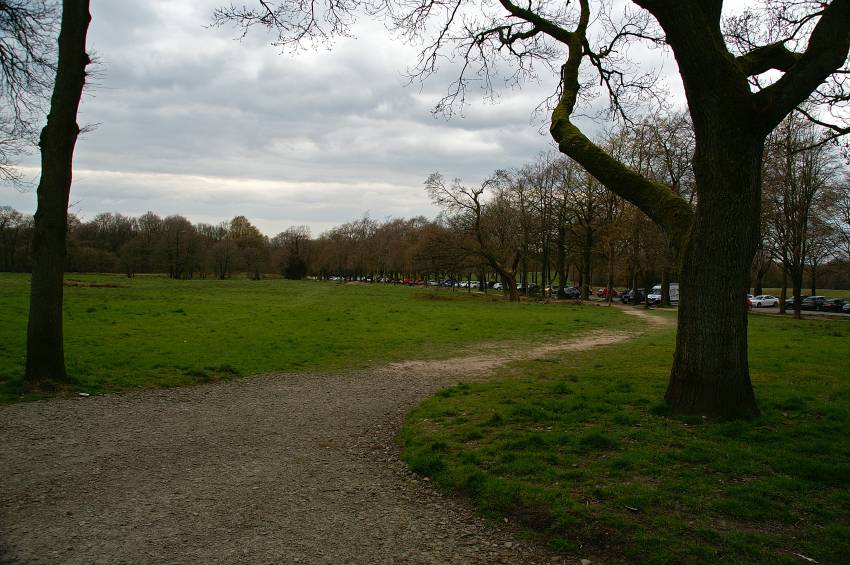 Parked cars as far as the eye can see, that being the drive to Rivington Hall, there's a number of such drives all with parking, all full, a number of car parks all packed solid, did i forget to mention, parking's free.

Bleached by the sun a dead tree in Breres' Meadow. 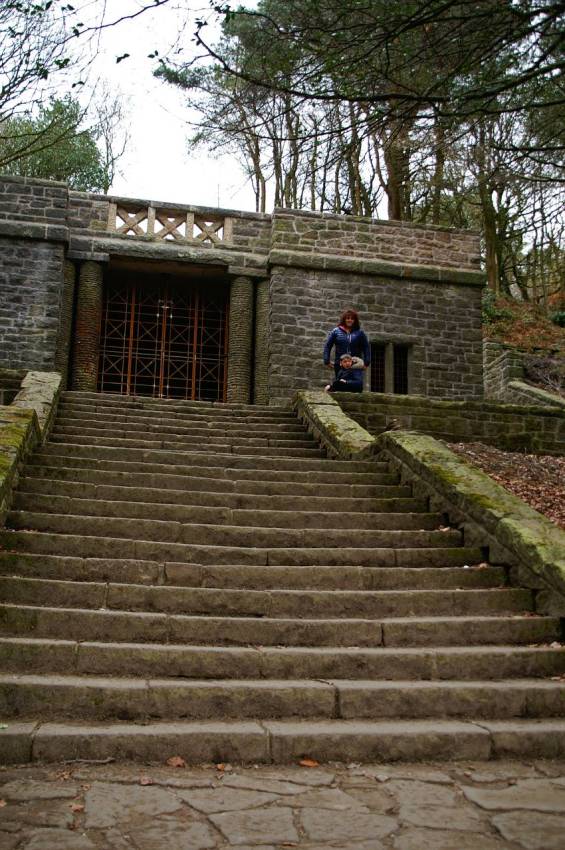 Sue and Jack at one of a number of summer houses. 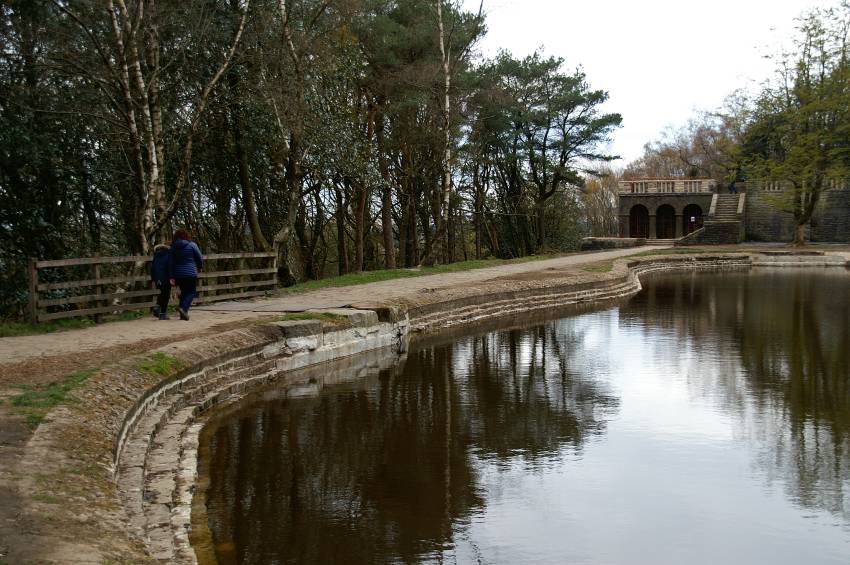 Our chosen route passed this restored pond, and yet another summer house. 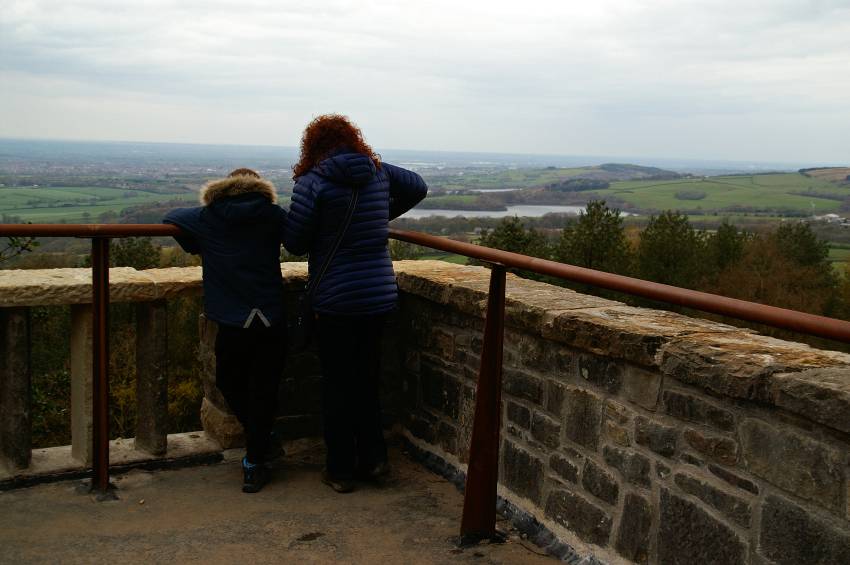 From the roof of the summer house Sue and Jack enjoy stunning views. 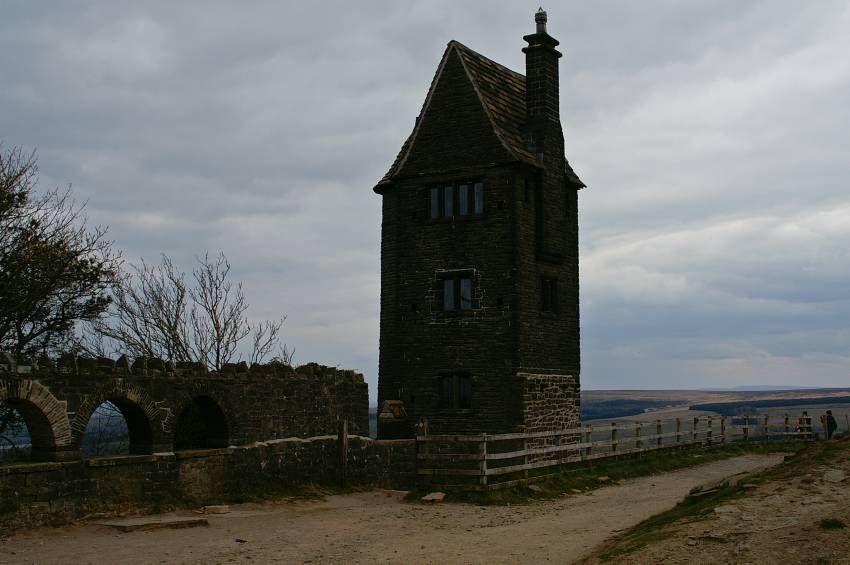 In the north east corner of the terraced gardens the Pigeon Tower, four stories each a single room, comprises of a sitting room with four light mullioned windows, the second and third stories being dovecotes. 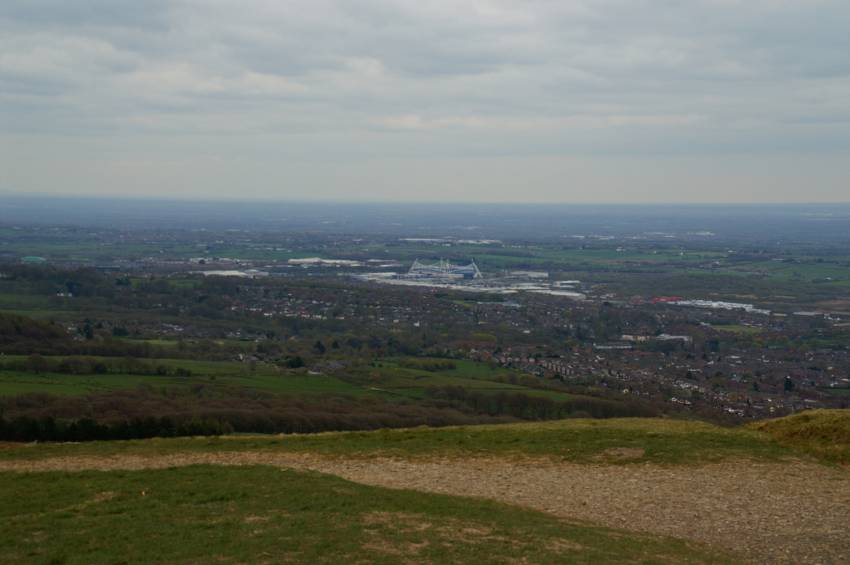 Stunning views over Horwich and Bolton from Rivington Pike. 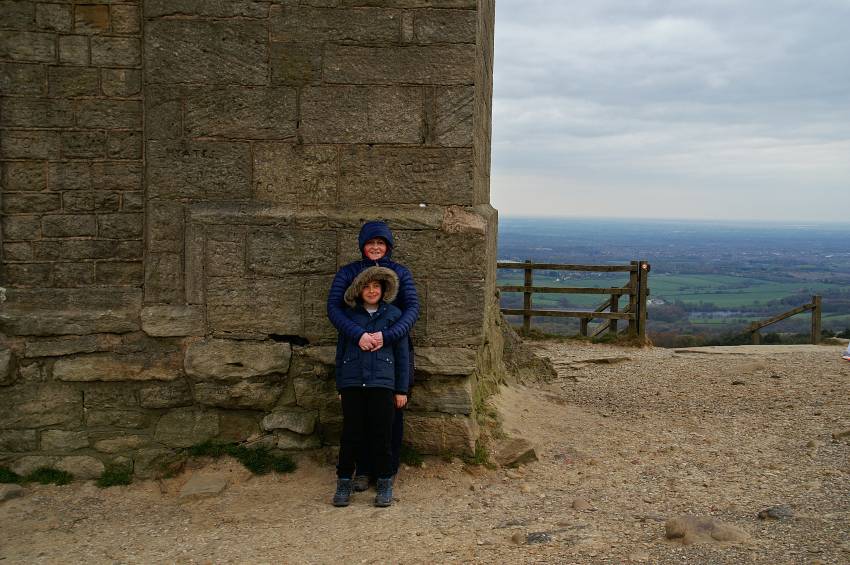 Out of the bitter wind. 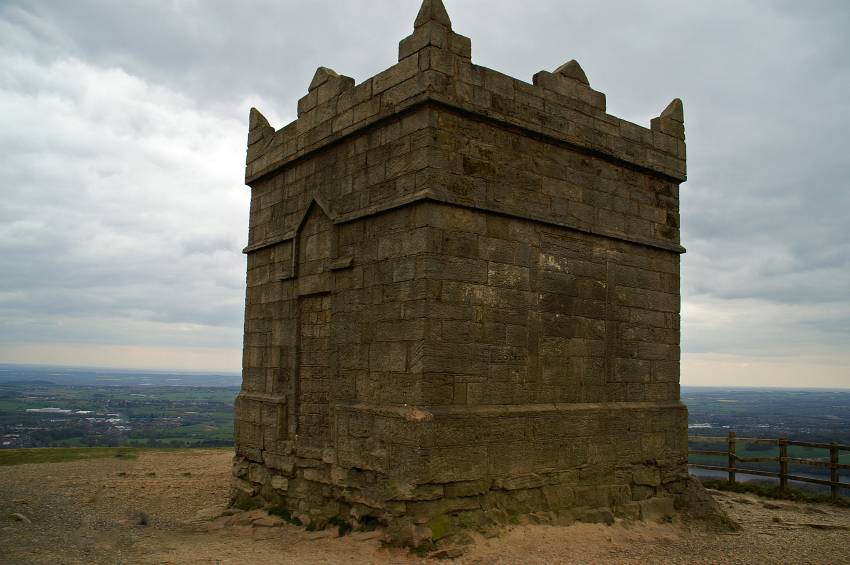 The Tower once a hunting lodge built in 1733 from the remains of a beacon that once stood on this spot. 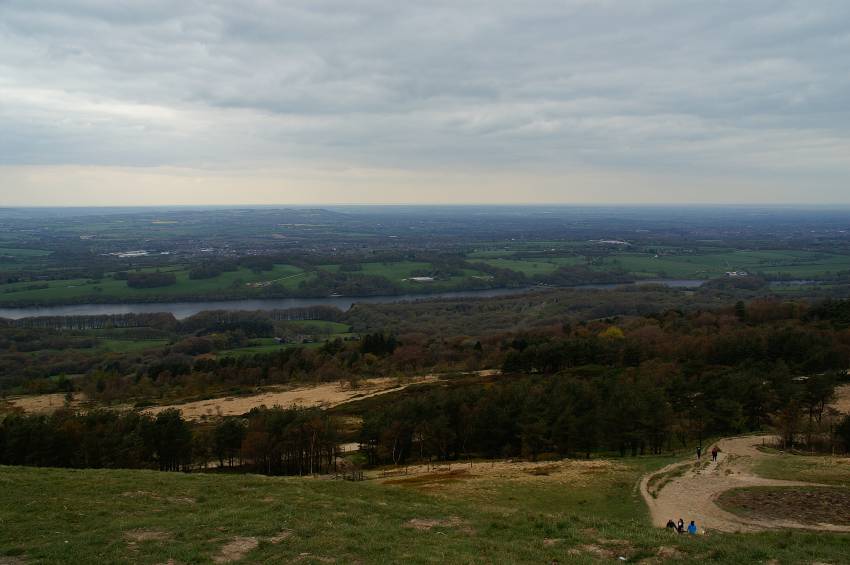 A stunning view from Rivington Pike, Upper and Lower Rivington Reservoirs and a distant Fylde Coast. 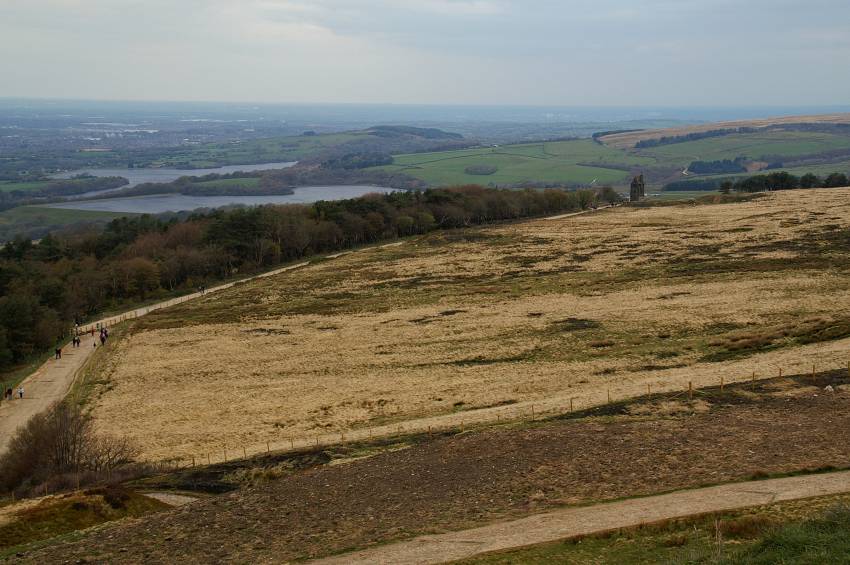 Let the Belmont Road lead the eye to Pigeon Tower, beyond the tree line Anglezarke and Yarrow Reservoirs. 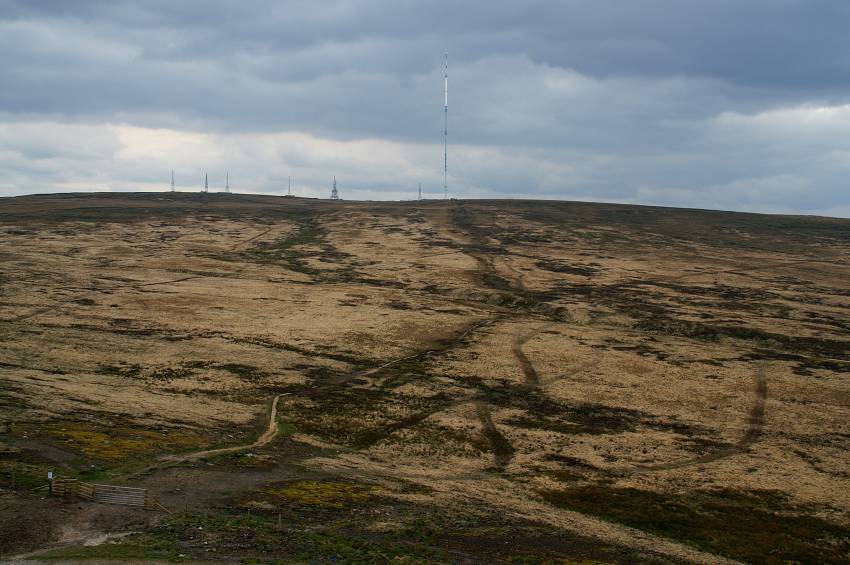 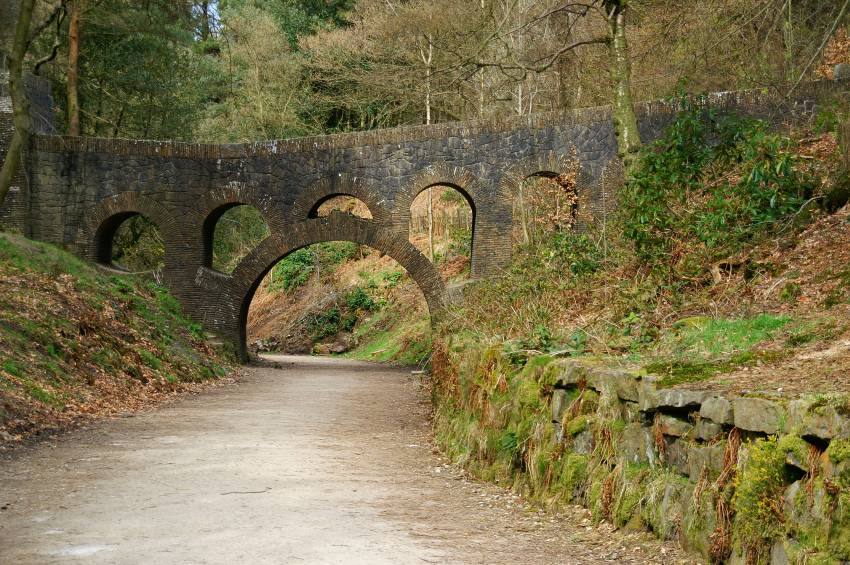 The many arches of Lever Bridge spans Royton Lane the main thorough fair through the Terraced Gardens.