Notes. Come take a wander with us over exhilarating cliff top paths gifting the lucky rambler with glorious ocean views, we'll look down into the terrifying depths of Hell's Mouth a small cove dwarfed by a group of shear cliffs over 300ft high, once a popular landing point for smugglers. We'll wonder at immense granite boulders christened Bedruthan Steps after the giant Bedruthan used them to cross the bay, we'll need to take care on this short ramble, the geology is a mix of mud stone, sandstone, slate and siltstone an unstable mix as shown in 2011 when a massive slice of cliff crumbled into the sea. A regular occurrence but rarely caught on film.

We parked on the North Cliffs car park around a mile and a half south of Gwithian where the A3301 descends to Hell's Mouth, once booted we followed a path to the rear of the car park, this ushered us to the South West Coastal Path above stunning sea cliffs, we turned right, the path then guided us to Hell's Mouth. Peer into it's depths, this spectacular cove gives you that falling feeling, a popular suicide spot and notices posted by the Samaritans told of the dangers.We spent some time drinking in the atmosphere before re-tracing our steps.

After passing the path accessing the car park we continued through staggering coastal scenery, above Fishing Cove and Castle Giver Cove we wandered, we traversed the scrub land of The Knavocks before passing above Kynance Cove, once above Mutton Cove mournful cries could be heard rising from below, on closer inspection a colony of grey seals reside on this beach.

We wandered on to Godrevy Point where we sat and drank in staggering vistas stretching from Godrevy Island round the massive surf washed beaches of Godrevy Sands and Porth Kidney Sands, from Carbis Bay to the iconic sea side town of St Ives across the beautiful St Ives Bay. Drunk on stunning views we wandered south through a car park, a sandy path then guided us along the edge of a narrow lane above low cliffs dropping shear to the beach, we stopped for lunch at the Godrevy Beach Cafe before wandering on to Gwithian Bridge.

Sitting outside the cafe I studded the OS map, hunting for a route back, two stepped from the map sheet, both included road walking. In the end it was decided the most direct route would suit, less than a mile straight along the main road. 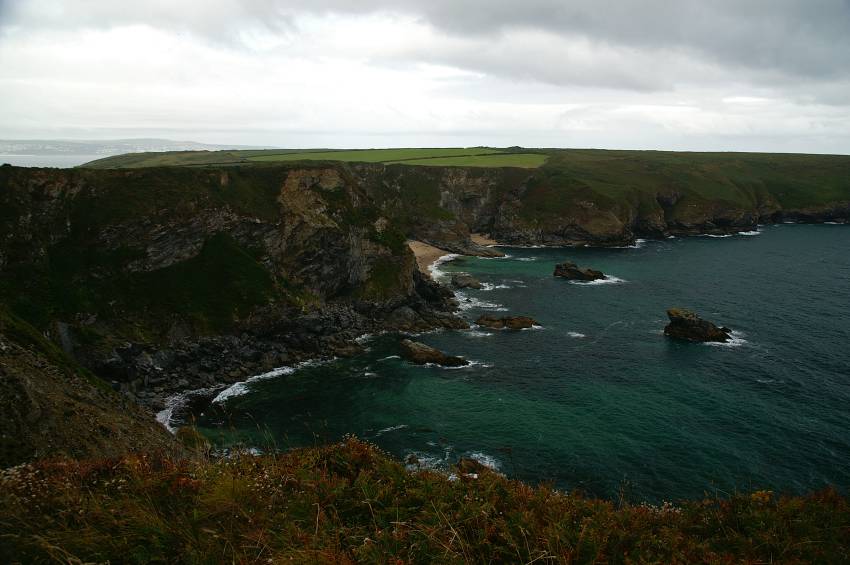 From the South West Coastal Path views to Fishing Cove and Castle Giver Cove with The Knavocks across the horizon. 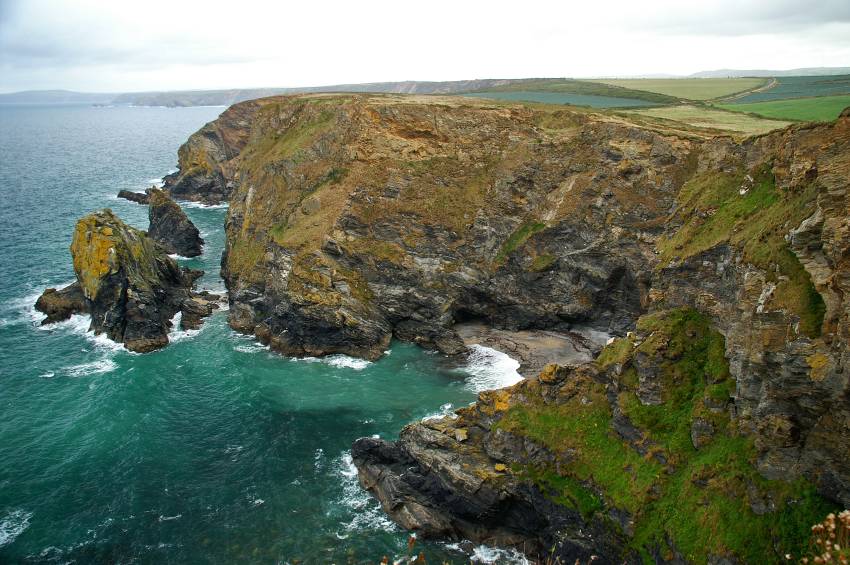 Hell's Mouth closed in by the cliffs of Hudder Down. 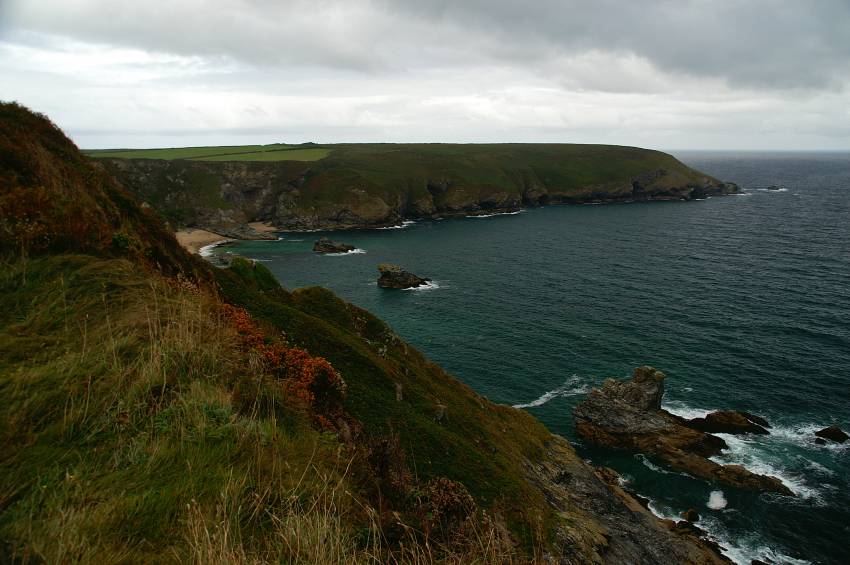 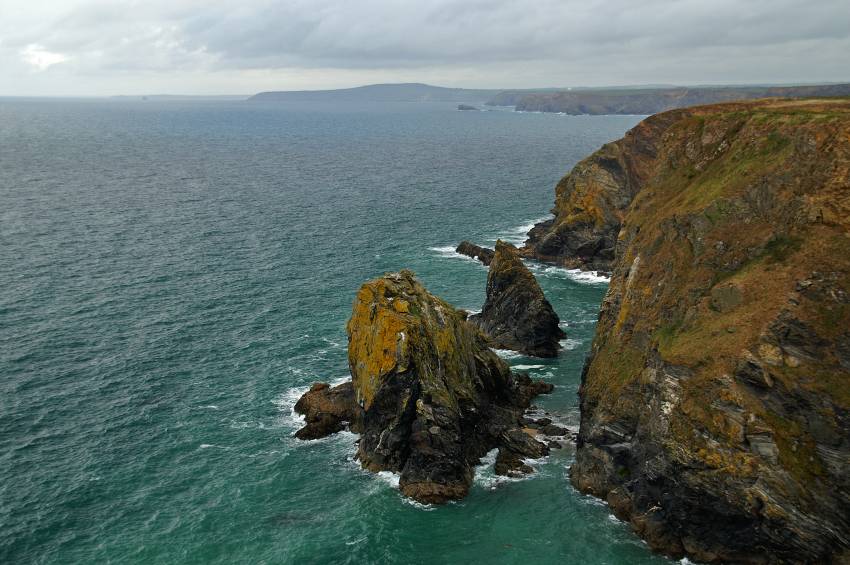 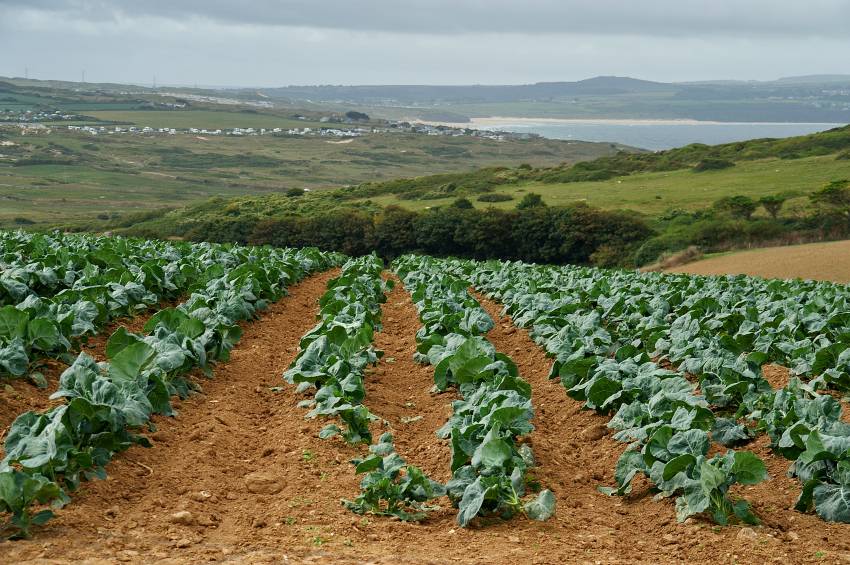 With the cliffs at my back views over a rolling landscape to St Ives Bay. 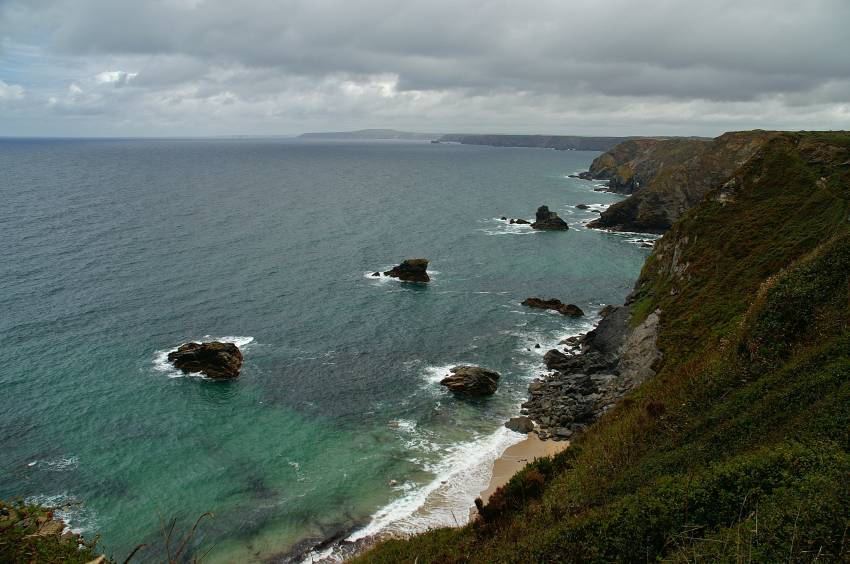 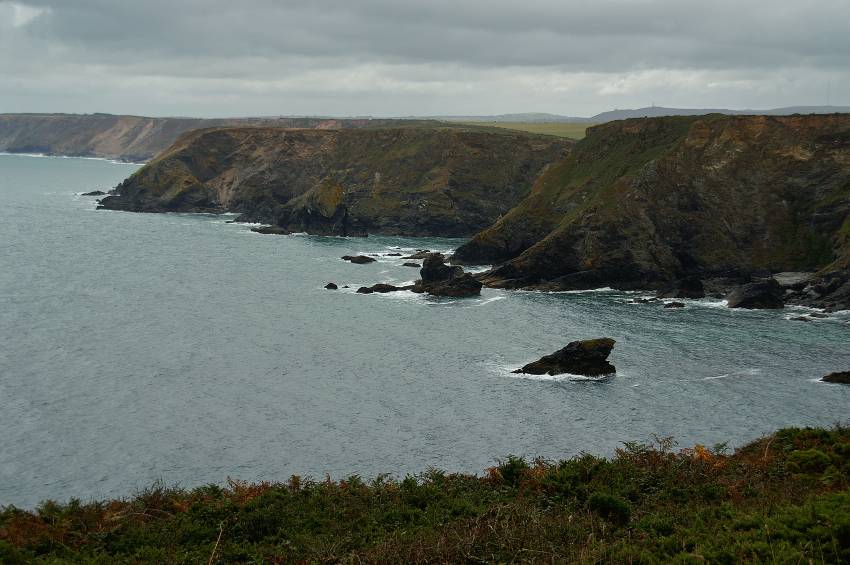 Looking back from The Knavocks, Hell's Mouth and Hudder Down, with North Cliffs beyond. 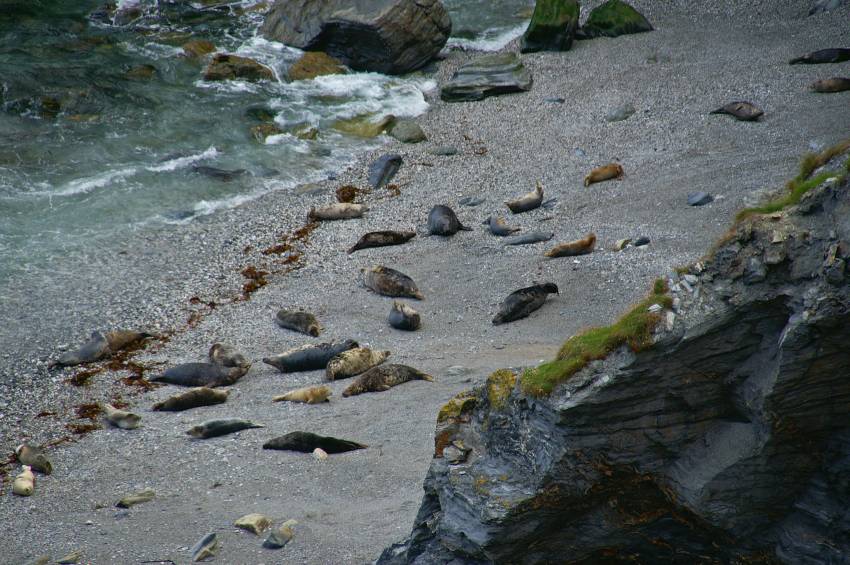 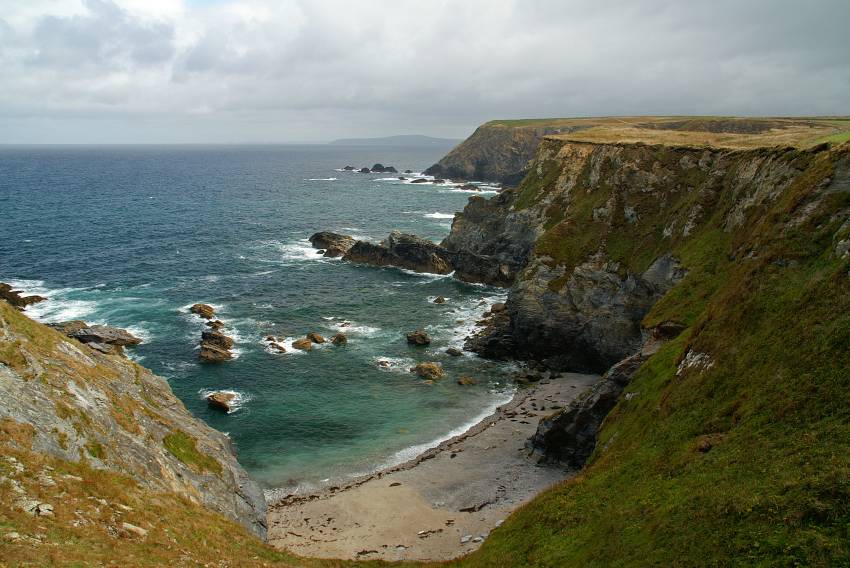 The Breath taking topography of the Cornish coast. 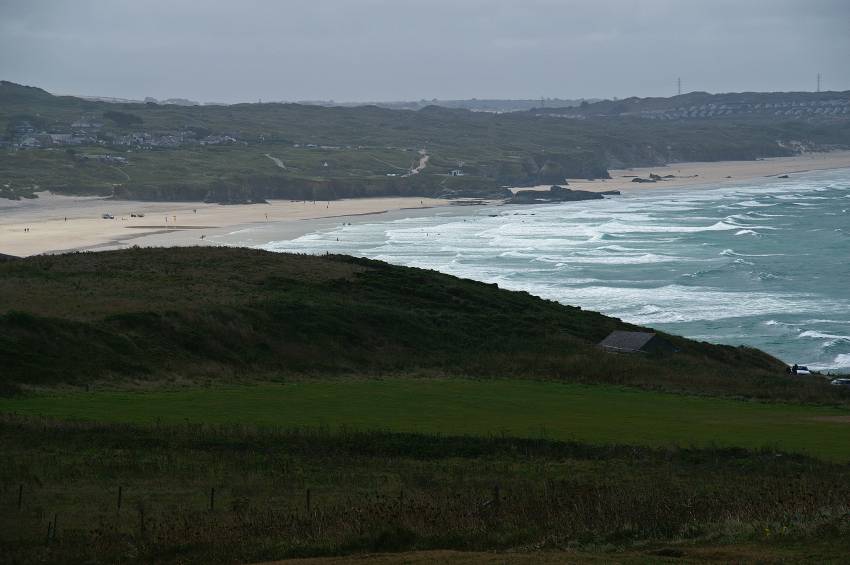 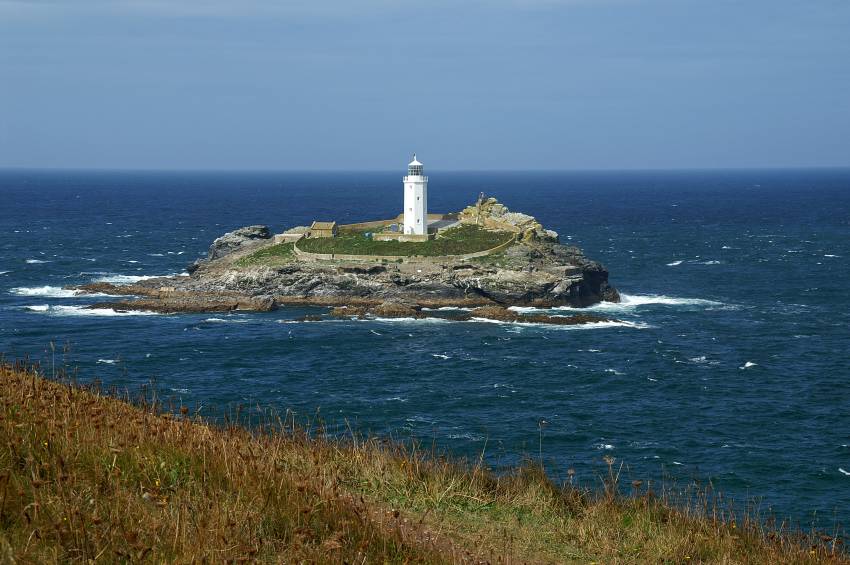 Godrevy Island and lighthouse, guarding an infamous reef called the Stones since it's construction in 1859. 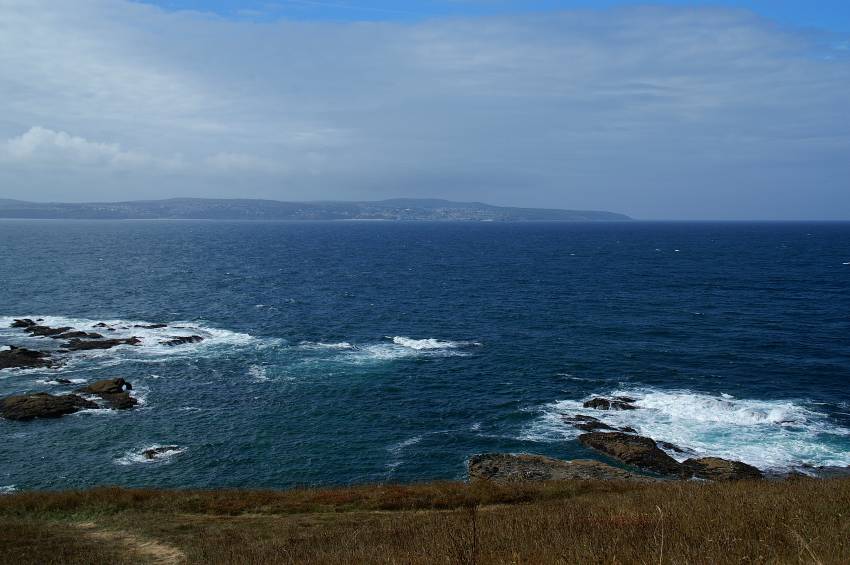 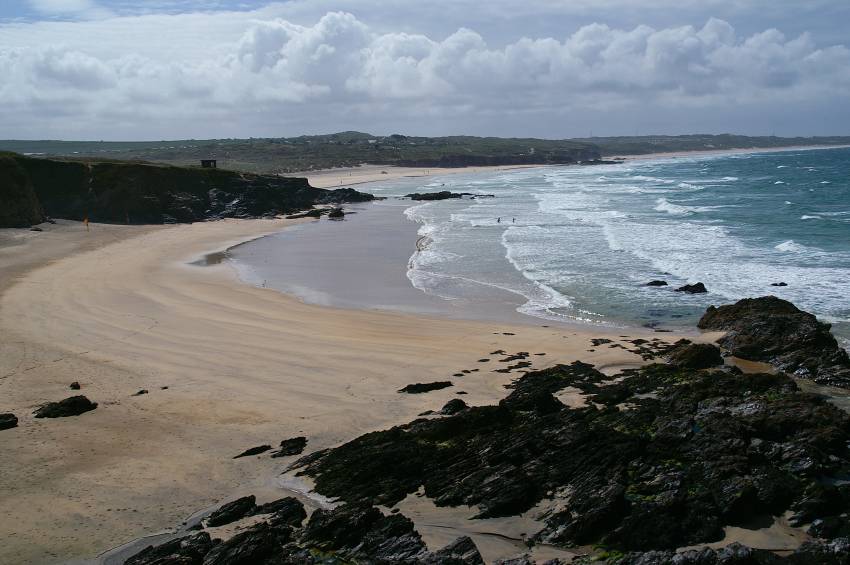 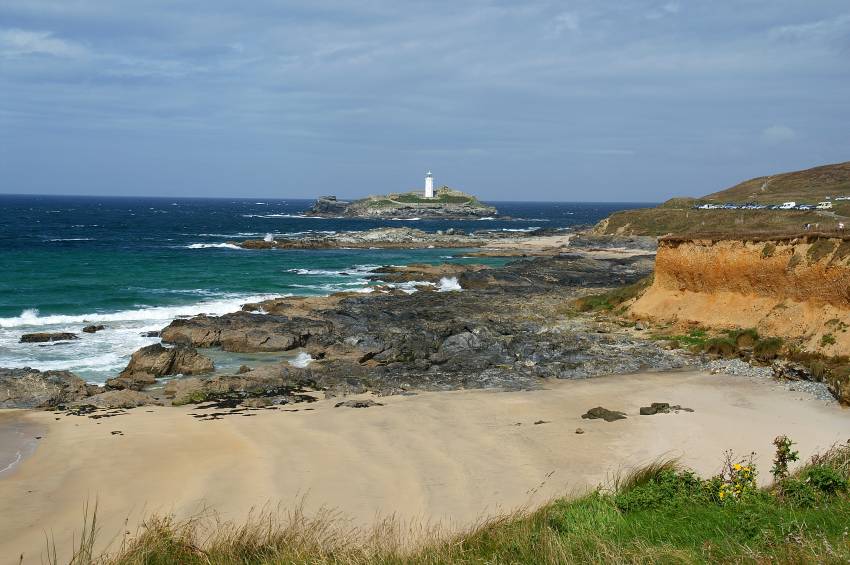 Godrevy Cove with views over The Cleaders to Godrevy Island.