Notes. Ever over done it? I thought so, well today I did just that and what makes matters worse we're going out tonight and I'm knackered, the boss won't be happy, but what a bloody good day out it was. February walking in a t-shirt, a few weeks ago I was up to my waist in snow, come join me I'll do the suffering you sit back and enjoy the views.

Sun rise saw me leaving the Old Dungeon Ghyll car park, I wandered behind the hotel to access the long finger of Mickleden and a stoney path that guided me up the valley passed the classic peaks of Loft Crag and Pike of Stickle and, the iconic climbing walls of Raven Crag and White Crag. The stoney trod guided me through exquisite morning light into staggeringly beautiful mountain scenery. On reaching a path junction I followed the Esk Hause Path, ascending in the company of Rossett Gill, then we come to the reason I was about to fall to sleep in my pint.

Imagine a younger me with a good head of hair, a cyclist with bulging calves, big engines to power me up the hills, well I some times think I'm still like that, today for instance. When the path swung away from the gill I decided to descend to the beck bottom, an uncontrolled descent, the banking collapsed under my weight, with a mucky arse I assessed the situation. I was in the beck bottom, there wasn't too much water, I might as well ascend it, which I did. Steep, littered with teetering boulders, hands on in places it took ages.

At this point don't follow in my foot fall, the gill has changed immeasurably over the years, nothing like I remembered it. A green trod used to ascend the left hand bank, a great way to climb the hill, no longer, washed away or covered with loose unsafe boulders. This was not a place to ascend alone, never the less I did, but won't be doing it again. Like a cork from a bottle I popped out at the head of the gill above Angle Tarn, sat on a rock and assessed my situation. The climb had taken it out of my legs, I felt like an old car, overheating, suspension knackered, only running on three cylinders, and I still had two hills to ascend.

No hurry it was a nice day, after a brew I felt a bit better, Esk Hause beckoned. On the climb to Esk Hause it was obvious this was going to be a long day, my pace slowed to a crawl and it was this crawl that would see me over Esk Pike and Bow Fell and The Band.

Once at the shelter I turned left following a stoney path to Esk Hause then left again to make the long slow deliberate ascent of Esk Pike. I sat amongst the impressive rock architecture decorating the summit, marveled at the impressive stone work carved by the action of wind, rain, snow and ice. Even more impressive the views, I may put myself out on a limb here but I'd go as far as saying from this rocky eyrie you get some of the best vistas in the Lake District.

On to Bow Fell, a stoney path under foot, I descended to Ore Gap then let a cairned path guide me through the massive boulder fields guarding the slopes of Bow Fell. Again I rested, my body complaining, it wouldn't stop nagging, if it was Sue we'd have fallen out but it's the only body I've got, I should treat it with more respect, at least it was down hill from here. The steep loose descent that followed deposited me at the mountain crossroads at Three Tarns. From this high coll I turned east to descend The Band. Across Earing Crag I strolled, passed White Stones, above Buscoe, Oxendale and Mickleden. When I ran out of hill I found myself at Stool End, after wandering through the farm yard the tarmac access lane ushered me back to the Old Dungeon Ghyll, journeys end and a well deserved pint in the Walkers Bar. 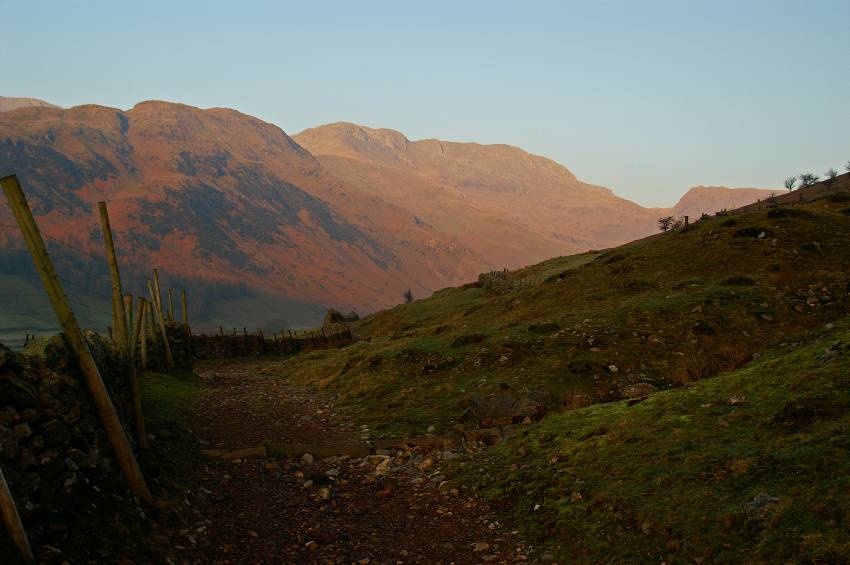 Striding out through early morning light looking to Bow Fell. 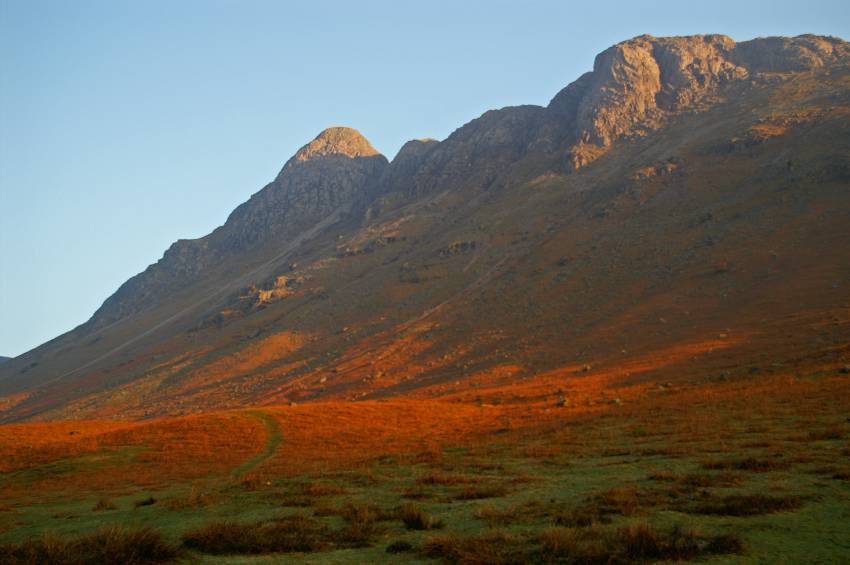 Lit by golden light, the dome of Pike of Stickle and the cliffs of Loft Crag. 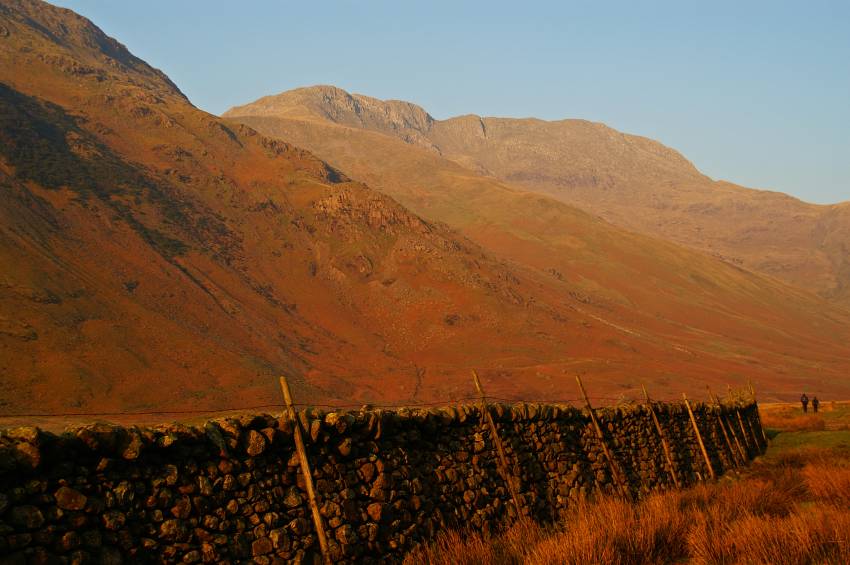 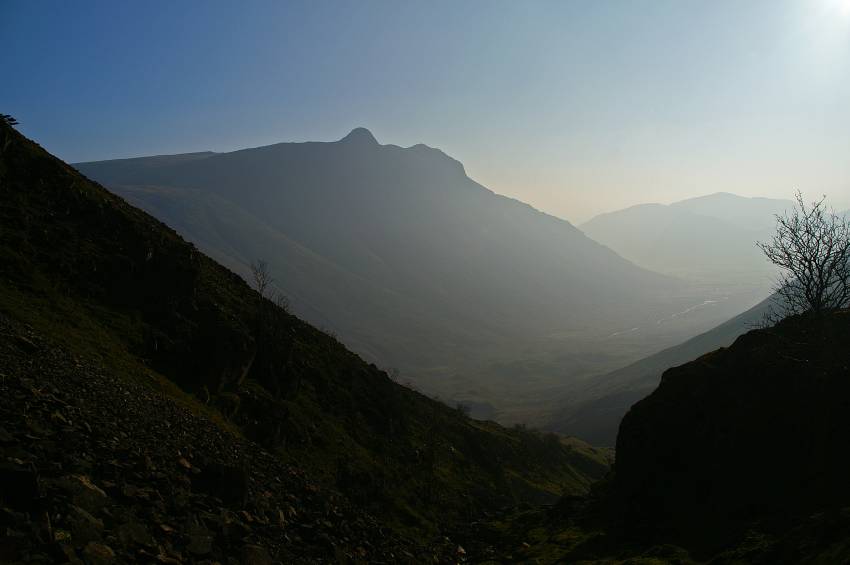 Toiling up Rossett Gill with this hazy view behind me, the Langdale Pikes with Lingmoor Fell melting into the murk to the right. 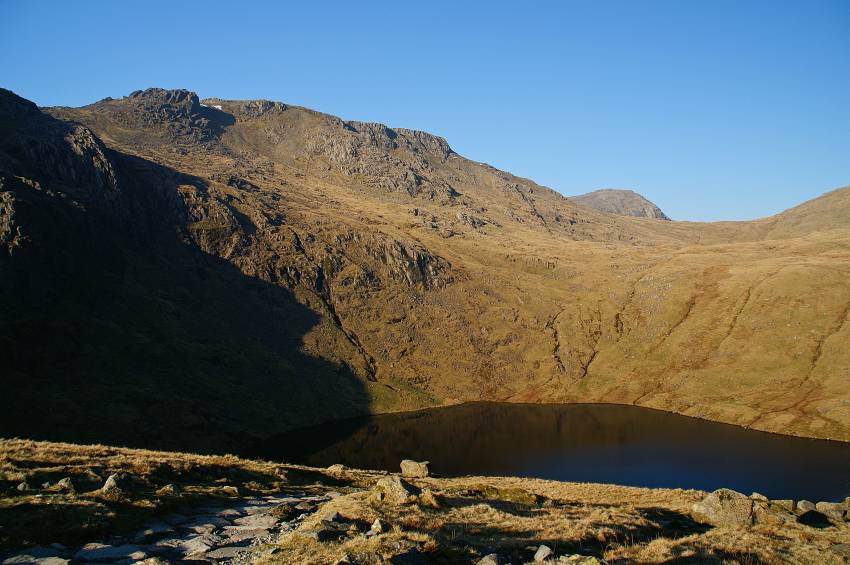 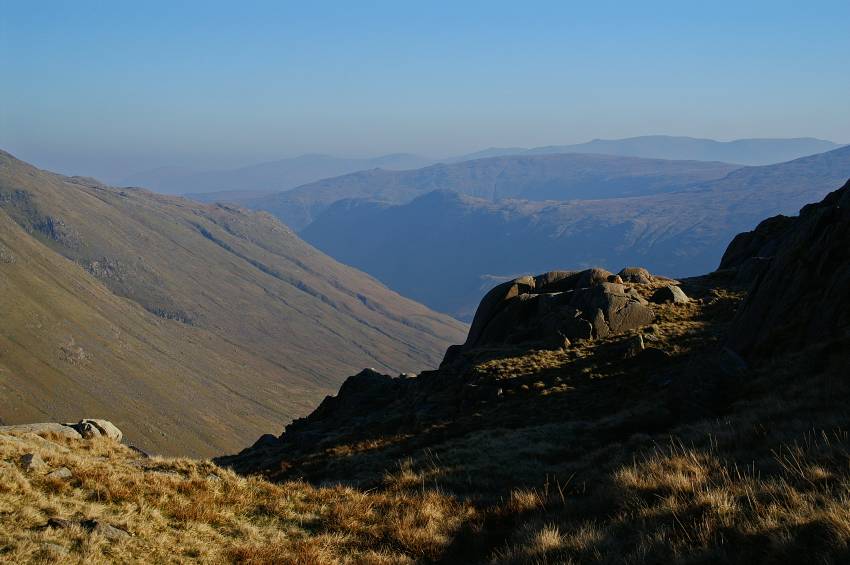 Above Tongue Head looking to the blue/grey shadowed faces of Eagle Crag and Sergeant's Crag. 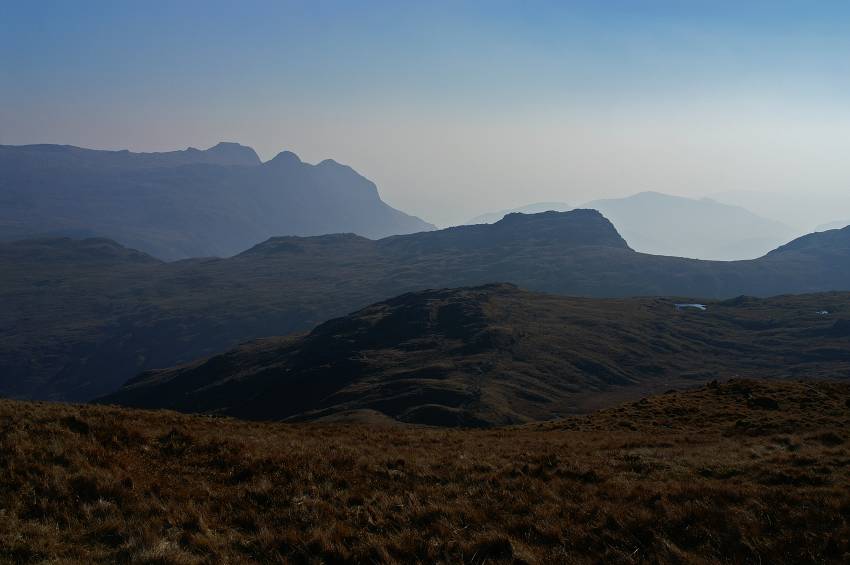 Heading up to the shelter on Esk Hause with this dazzling view to look back on, over Tongue Head, Rossett Pike and the Langdale Pikes. 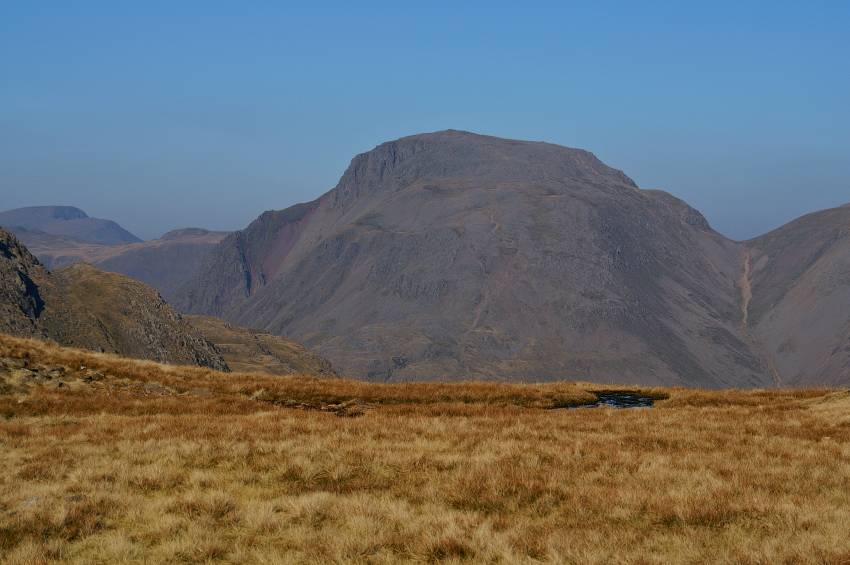 Great Gable as seen from the shelter on Esk Hause. 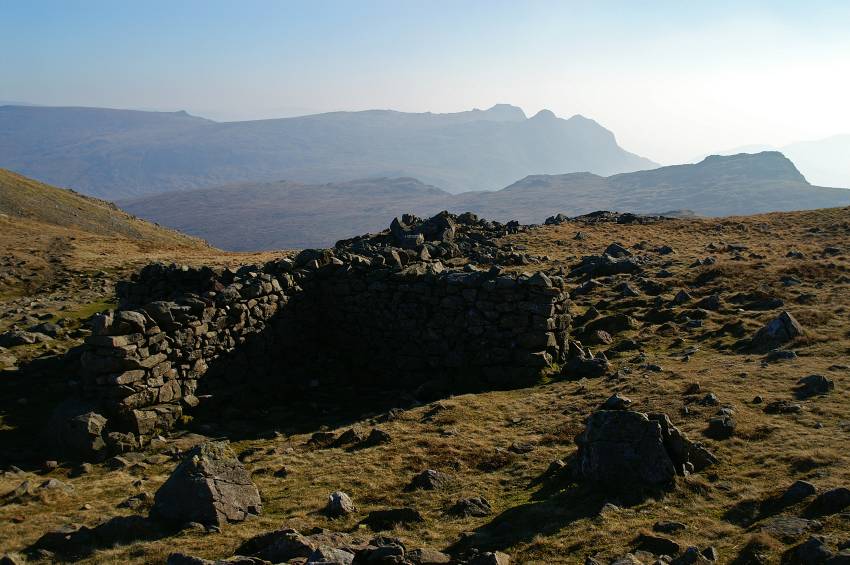 The shelter, usually a busy place, today I have it to myself. 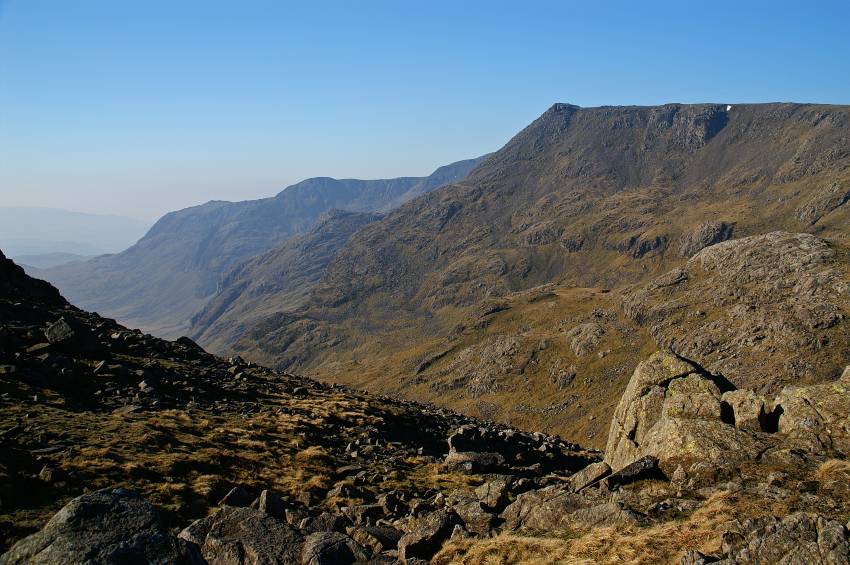 On the slopes of Esk Pike looking to Ill Crag and the Sca Fell massif. 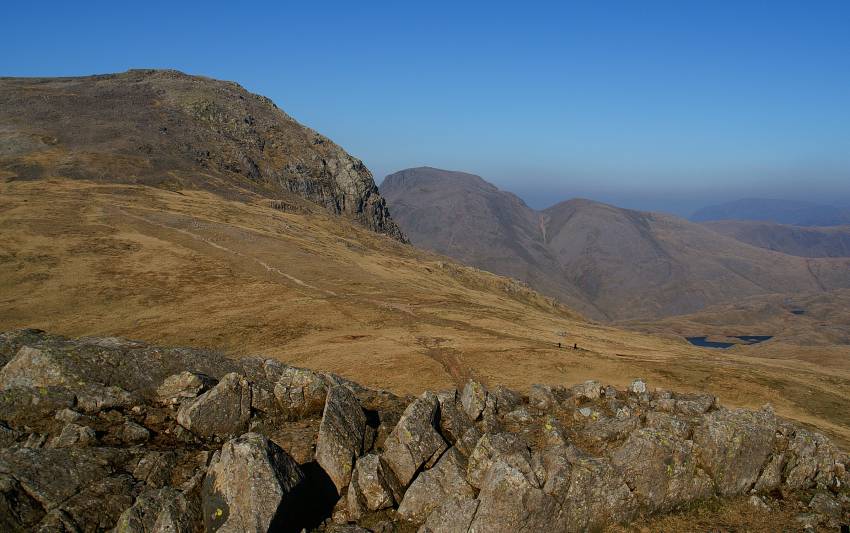 Impressive vistas over Esk Hause taking in the cliffs of Great End, with Great Gable and Green Gable split by Windy Gap. 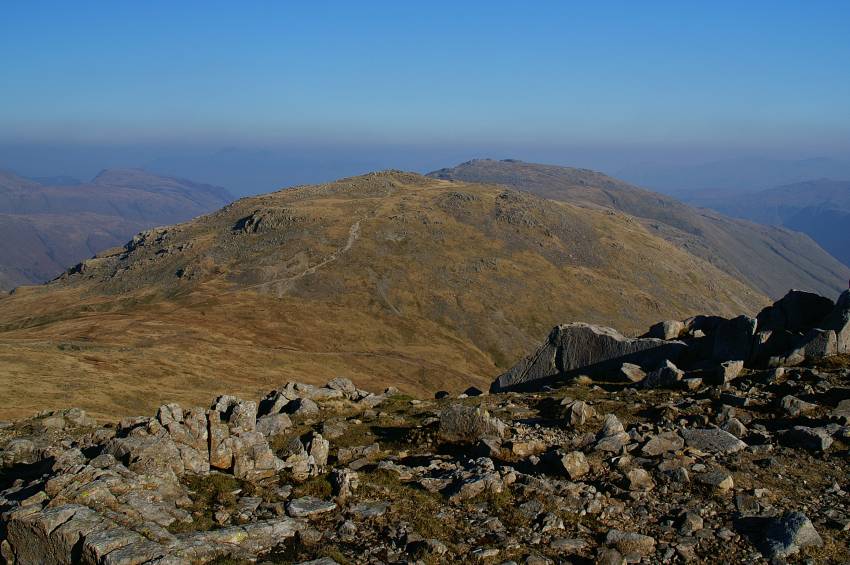 It's gorgeous up here today, look to the left you can just make out the shelter passed earlier, the path will carry you over Allen Crags and Glaramara. 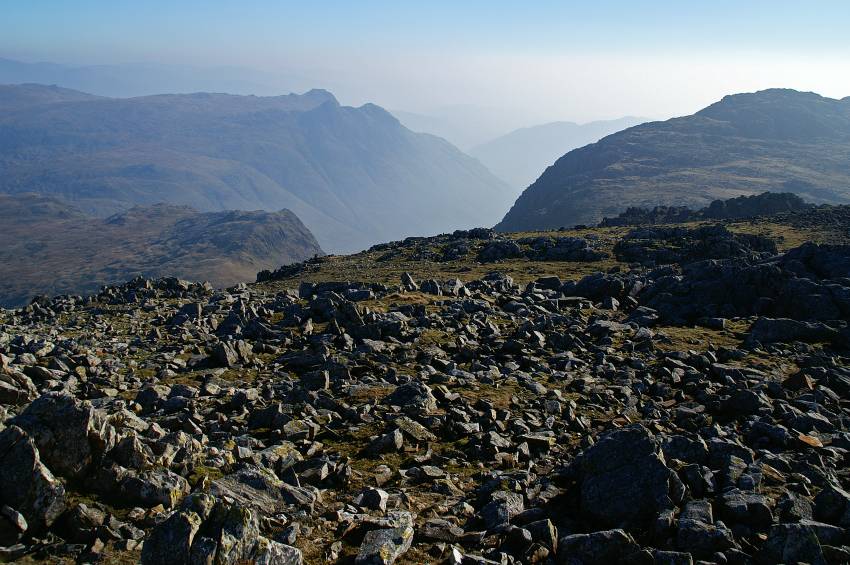 First-class the summit of Esk Pike, with a stunning view down Great Langdale. 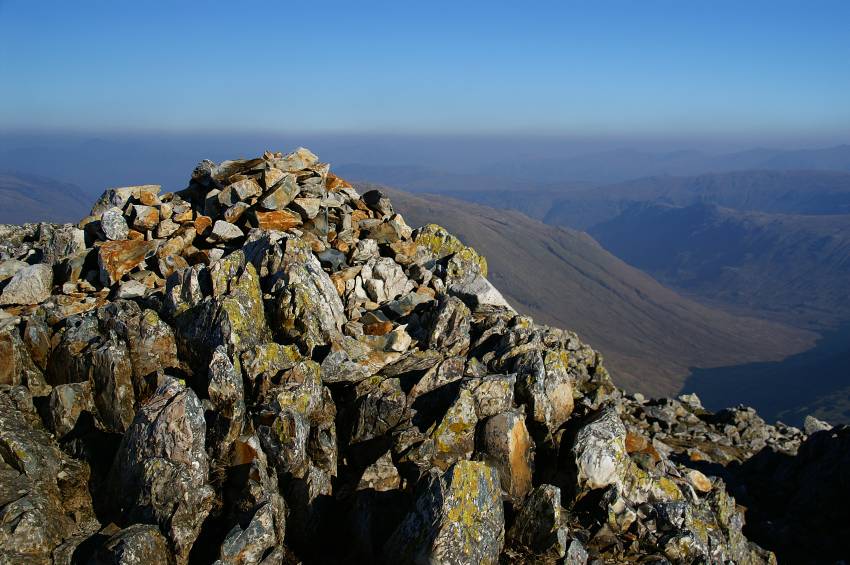 A summit cairn with a view. 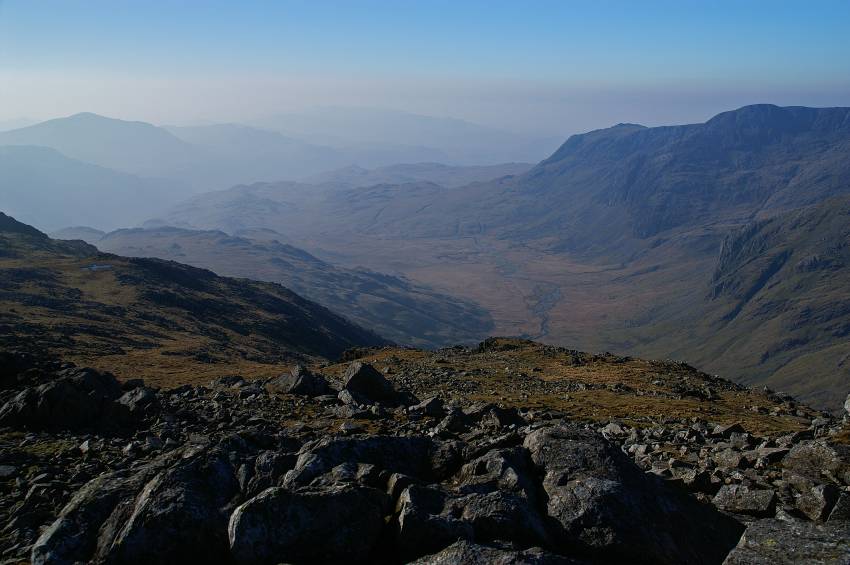 Harter Fell and Green Crag melt into the haze, seen over the Great Moss, with the cliff and petrified rock of Slight Side and Sca Fell to the right. Spectacular views from the ascent of Bow Fell, over Pike de Bield Sca Fell and the highest ground in England Scafell Pike. 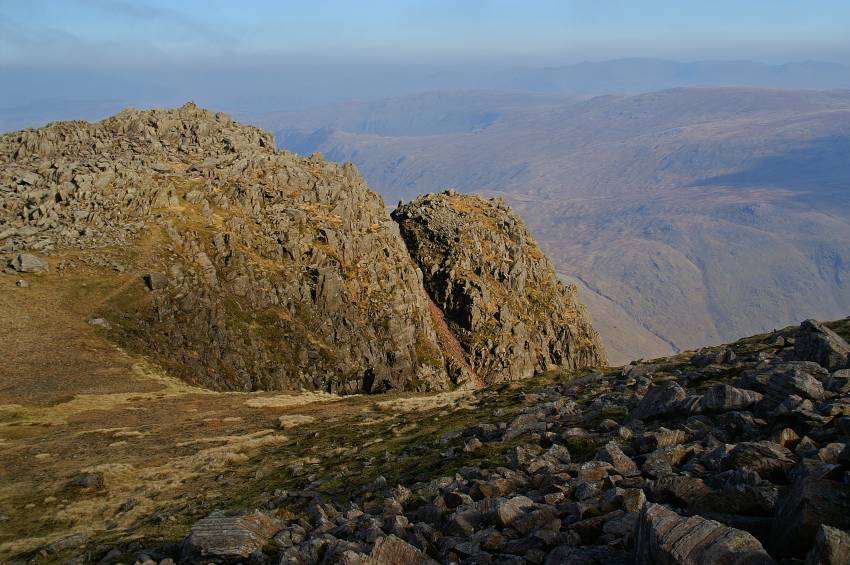 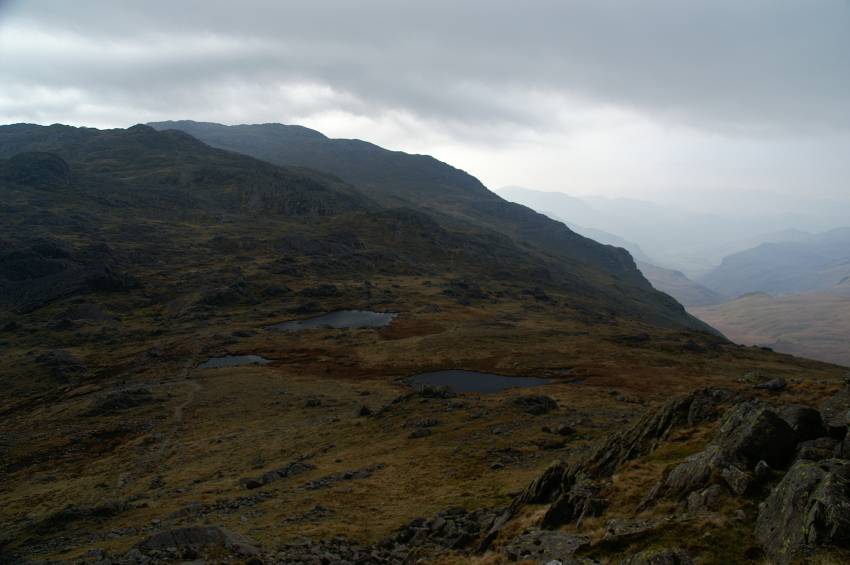 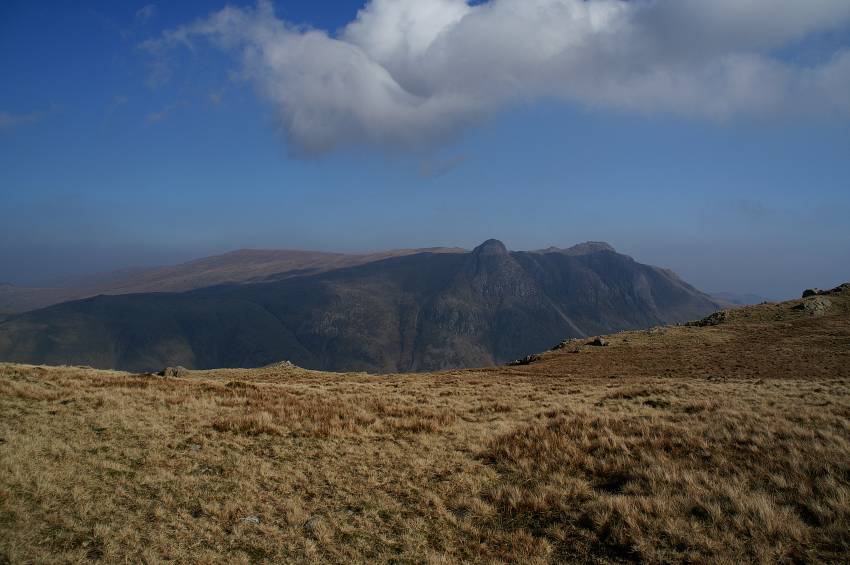 A handsome view to the Langdale Pikes from my traverse of The Band. Viewing Bow Fell from the stoney path across The Band. 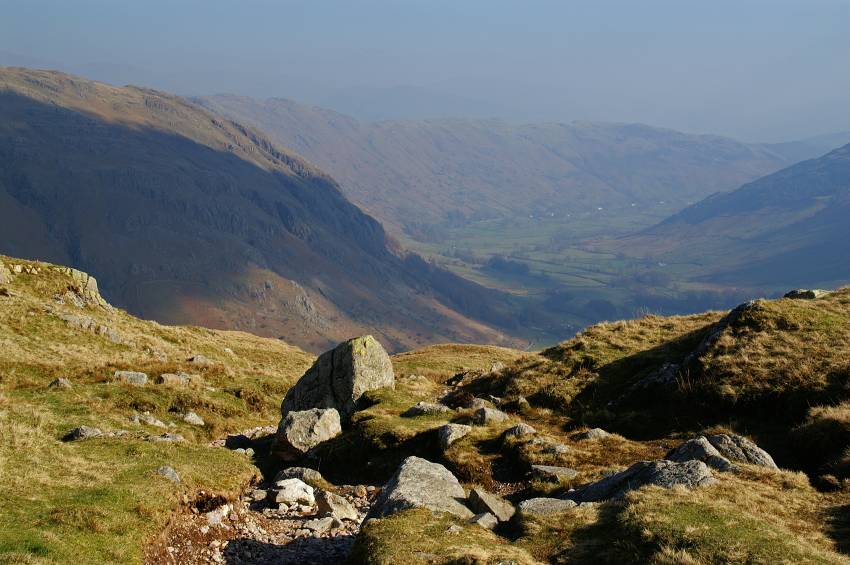 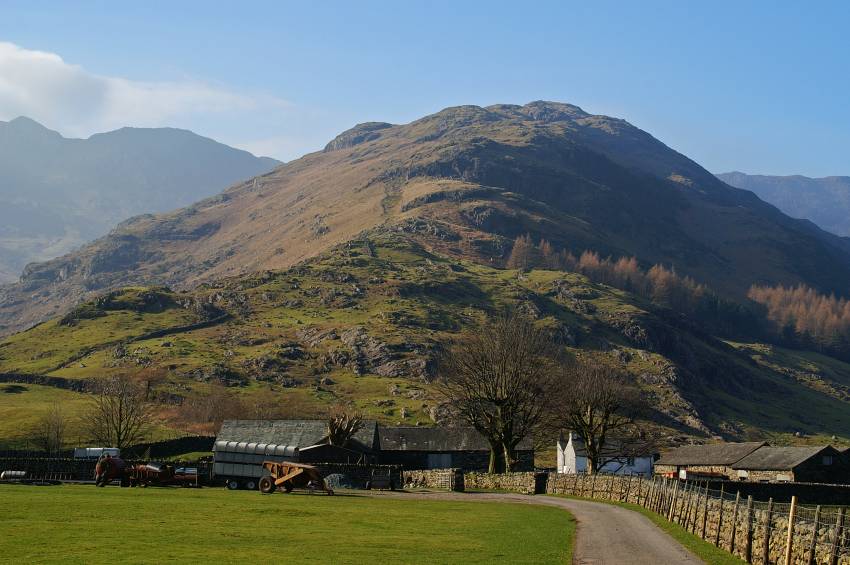 Stool End Farm with The Band rising behind.